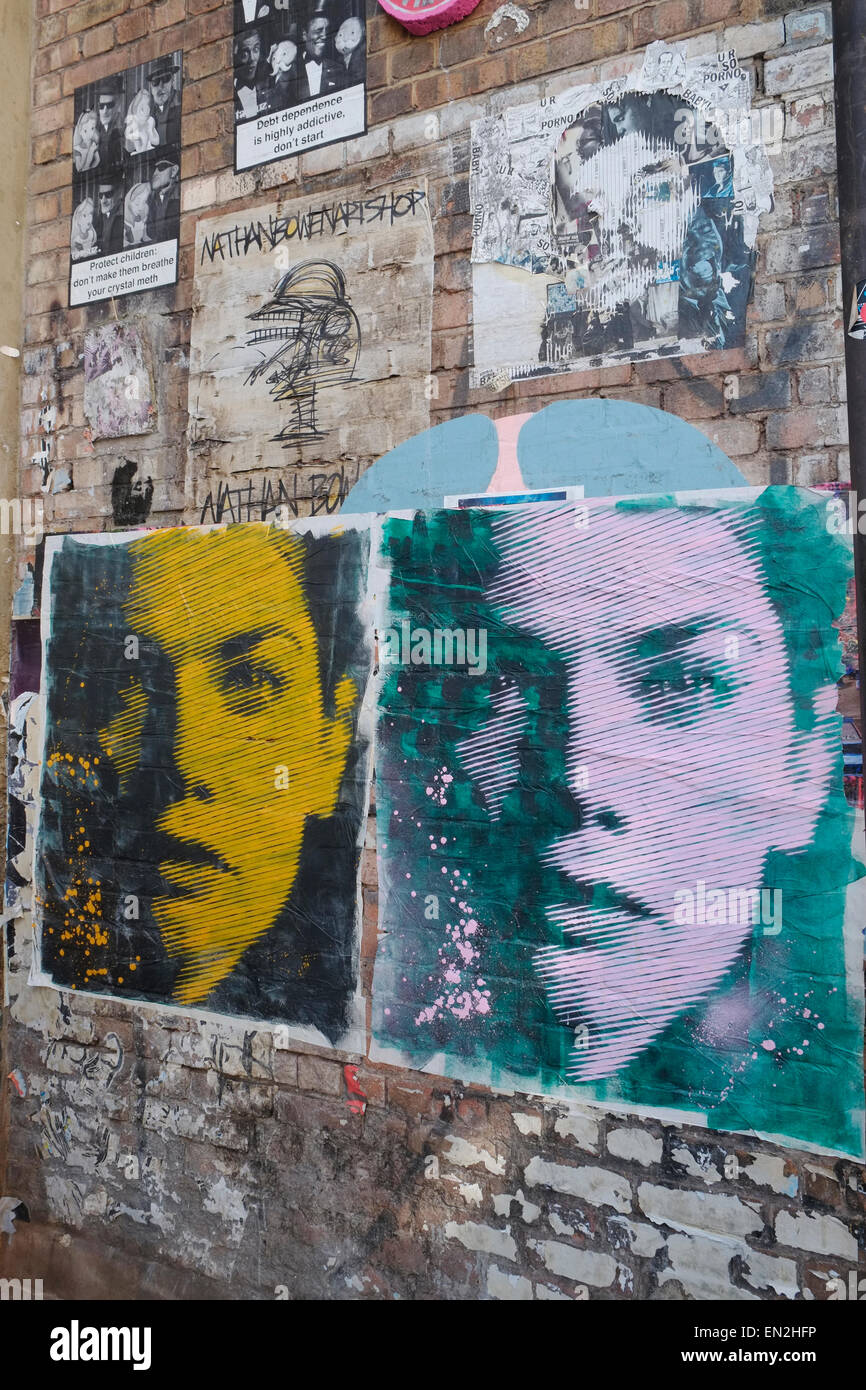 If you’re looking to get in on the street art action in London, there are five areas where you can find some great paste-ups. These are: Buxton Street, Fournier Street, Grimsby Street, Fashion Street, and Seven Stars Yard.

What are Street Art Paste-Ups?

Paste ups are an urban art form that has taken graffiti to the next level. They are works of art that are stuck on the walls, usually with water-based wallpaper glue, that are designed and conceived by the artist. A variety of techniques are used. Some artists create elaborate hand-painted paste ups. Others use digital collages and multi-layered multiples.

Some street artists create paste ups in their home, while others work on designs in their studio. The finished pieces are often commissioned to be used on CD covers, TV advertisements, or other public works.

While there is no real standard for what a paste up should be, some artists use a multi-layered method for their artwork. For instance, Stikki Peaches creates large-scale paste-ups on paper and adds splashes of colour to each one before installing.

Paste ups can be found in many cities around the world. Brighton, for example, has a number of paste ups. Many of them have a political spin. At least one artist’s piece is a parody of President Trump, while another uses the polarmermaid as advice to the Queen for Trump.

In London, the Brick Lane junction is a great place to check out paste up art. This area is located near the Shoreditch High Street station. It is also near another longstanding mural by Stik. There are also several buildings that are covered in stickers and posters.

If you’re looking to see some street art in London, one of the best places to go is Seven Stars Yard. This car park is located in a small alley off Brick Lane, and is an ideal spot for artists to get their hands dirty.

The former Seven Stars pub is covered in posters and stickers. Artists from all over the world flock to the site, and the area continues to be transformed by new pieces every day.

One of the most famous pieces on the building is the giant rat painted by Banksy. Other pieces include work by Joe Caslin and Emo Ryan. You can also find a number of street art posters on the wall, including those by Donk and Levelet.

While the location is not open to the public, it’s a great place to see a range of art. The building looks like layers of different works, each created in a different state of decay. It’s a good idea to check it out on a Sunday when the market is open.

The former Seven Stars pub was founded by French Huguenots in 1711, and was later rebuilt. There’s evidence of the Huguenots remaining on the walls, but the building has been closed since 2002.

The area has been known for its history and its ever-changing facade, and it’s a popular place to take a street art tour. Visitors can find a variety of unique artwork, from stencils and stickers to large set pieces.

If you are looking for street art in London, look no further than Brick Lane. This vibrant part of the city is a hub for both music and street art, and has seen artists from all over the world come to paint.

Having been redeveloped and expanded over the years, there is now a rich array of paste up art to be seen. There are also some great murals here too. One of these is the “Joe’s Kid” by Jimmy C, which is a great reference to post-impressionist painters.

The former Seven Star pub is covered in posters and stencils, and is another spot where you can see a mural. It is also a good spot to see a three-storey-tall crane by Belgian street artist ROA.

Fashion Street is an area that has some good paste ups. Here you can find work from artists such as D-Face and the legendary Banksy.

Another street that has been turned into a paste-up haven is the former Religion clothing shop. Many of the walls here are covered in posters, stickers, and a variety of other forms of street art.

Some other places to see some fantastic paste-ups are Buxton Street, Hanbury Street, and Princelet Street. All of these areas are in the eastern part of the city, and each one offers a unique experience.

The former Endell Street Military Hospital, which used to be near Covent Garden, is home to a memorial commemorating Louisa Garrett Anderson and Flora Murray. As you enter the building you will see a large mural that has a plethora of colourful elements.

If you are looking for paste-up art in London, you might consider Grimsby Street. This short, cobbled spur near Brick Lane is home to a number of street artists. There is an array of artwork on the walls of Victorian houses and other buildings.

One of the biggest murals on the street is a Banksy mural. It’s a bold piece, and curiously moving. It features cartoon characters walking into a hot pink sunset.

Another notable mural on Grimsby Street is a long-standing work by Stik. The 8ft figure of a woman in a cat mask has a fuchsia pink nose and hair. Her hat is adorned with a flower.

The former Seven Star Pub is covered with posters, stickers, stencils and other street art. In fact, it has become a popular place for paste-ups.

Paste-ups are the practice of pasting up posters and other paper-based art on a wall. They are often called wheatpaste in the US.

London is home to a handful of paste-up hotspots. Fashion Street is a great starting point for a tour of the area. Here, you’ll find some good art, although it’s not as many as Hanbury Street. Visiting the area is better in the daytime.

Grimsby Street has an unusual blend of artwork. You’ll find some large scale pieces by Stikki Peaches, along with smaller works by artists such as Neon Savage, Aida Wilde and JR.

Located in Brick Lane, Buxton Street is a small, but mighty street art hotspot. It consists of the former Seven Star pub and a number of shops, including the Religion clothing store, which is covered in an array of street art.

There’s also a lot of other stuff to see in the area. The Pavilion Gardens, for example, are a grade two listed visitor attraction with an impressive number of things to do. They have a museum and art gallery, along with a large and beautiful garden. In addition, they host many events and fetes throughout the year.

Other highlights include the Gladstone Pottery Museum, which is located inside a former Victorian factory, and the Trent Waterfall. This waterfall, which has a nice view of the surrounding countryside, features nature trails and a few viewpoints.

Buxton Street also stretches into Allen Gardens, which is a semi-legal graffiti spot. Many of the walls in the park are regularly painted, making it a good place to see what’s on offer.

Aside from the usual tyres and tarmac, there are several interesting things to see, including a miniature train in the gardens and an octagonal hall. Buxton Park is also home to a large, Victorian palatial opera house. One of the largest in the country, it was designed by Edward Milner.

As well as being a great source of fun, Buxton Street is also a good starting point for a tour of the best paste-ups in London.

Fournier Street is a street in London, England. It is in the Spitalfields and Banglatown electoral division, which is within the policing area of the Metropolitan Police Service force. This area also includes the Bethnal Green and Bow constituency.

There are various types of housing in Fournier Street. However, no single type of dwelling accounts for more than half of the housing. Most of the homes are mixed, containing housing types from different periods.

Some of the buildings on Fournier Street have been covered in paste up artwork. These have been created by a number of different artists. Local artists include Ben Rider, Gnasher, and Trust Icon. Others include City Kitty, Endless, and Vanesa Longchamp.

In addition, a number of shops in the area have been covered in street art. For instance, a former Religion retail shop is covered with an assortment of paste ups. Another building in the area features a sculptural piece. The building’s facade is adorned with a geometric “Flower of Life” pattern.

Fournier Street was also a prominent site for the London International Paste Up Festival. This festival ran from 20 October to 23 October 2022. A total of 300 artists participated in the event.

The LIPF team was able to decorate the walls of seven locations. None of these had been used in the inaugural 2021 event. All of these are now semi-legal spots for graffiti artists.