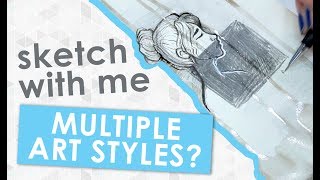 Among the different art styles are Abstract, Academic, Psychedelic, Pop, and Photorealistic. These are just some of the art styles that are popular today. However, there are many more that aren’t as well known.

Historically, abstract art styles have evolved because of technology and the industrial revolution. In the early 1900s, artists began to question whether they should focus on the image itself or the actions it depicts. This led to the advent of new abstract art styles like action painting.

Action painting is a type of abstract expressionist painting that involves pouring or splashing paint. The technique may also be used to create the illusion of movement.

In an abstract painting, the colors, shapes, and lines used to represent the subject matter are used to convey an emotional response. It is often said that the use of colour and shapes is one of the main reasons why paintings are popular.

However, the real trick is to convey your message in a way that’s not too overwhelming. Your abstracts should be simple and concise, but should also be able to stand on their own.

During the late 1960s, photorealism began to gain popularity in the United States. Some of the first artists to experiment with this style included Richard Estes, Audrey Flack, Chuck Close, Denis Peterson, and Ralph Goings.

These artists use large-format cameras to capture their subjects in detail. They then paint or draw on the canvas, using well-defined lines and color to represent the subjects. The paintings usually depict scenes of scenery, portraits, and everyday objects. They often combine the effects of photography with advanced computer software to create images.

Some of the techniques used by photorealists include a light pencil matrix for scaling up photographs, a high focus on detail, and a reintroduction of deliberate planning. These methods elevate the impact of photorealism by introducing a human element.

The technique of creating large-scale photorealistic paintings is popular with painters like Oscar Okonu. He estimates that each piece he creates requires ten pens. He works in acrylic and sometimes with an airbrush. He also uses markers for quick doodling.

Among the many art styles, Pointillism stands out as one of the most unique and forward-looking. This was a revolutionary style of painting that used tiny colored dots strategically placed near each other in order to create an optical illusion.

The technique is based on a scientific principle. The theory holds that the distance between dots of color is proportional to their optical mixing. This gives the viewer the impression that each dot is a distinct color. However, there is no way to predict how each dot will be perceived.

The pointillists re-thought portraits, landscapes, and seascapes. Their artworks were a lot less aggressive and looked more harmonious. They also used variations of similar shades of color, which deepened the complexities of color.

The Pointillist style is still used by many contemporary artists. It was an important influence on other emerging art movements, such as Fauvism, Cubism, and Surrealism.

The Pointillist style was invented by French painter Georges Seurat. It was initially rejected by the art community because of its uniqueness. The name comes from a term used by French art critic Felix Feneon.

During the 19th century, painters were experimenting with new techniques for capturing the light and colour of the world. One of the most important art movements was Impressionism. This style of painting emphasized the fleeting nature of light. Using the brush to paint quickly, the artist aimed to capture the essence of the subject.

Among the founding members of Impressionism were Edgar Degas, Camille Pissarro, and Claude Monet. The painters were also encouraged by Jean-Baptiste-Camille Corot, who urged the younger generation to paint in the direct style.

Initially, the public was hostile towards Impressionism. However, the paintings gradually gained respect. The public began to believe that the artists had captured a fresh vision. In the 1870s, the painters began to organize exhibitions. These were called Impressionist exhibitions.

During these exhibitions, the painters experimented with different methods and a variety of mediums. Some of the techniques used included using coloured pencils and pastels. The painters were also encouraged to make quick sketches.

The Impressionists were able to capture the nuances of sunlight, and they began to paint landscapes. They were also influenced by the works of Johan Barthold Jongkind, who used colour in a direct way. The painters also experimented with plein-air painting.

During the late 16th and early 17th centuries, Baroque Art was a style of painting that developed from religious upheaval and political change in Europe. The Catholic Church, which wanted to reconnect people to its beliefs, commissioned artworks to illustrate its dogma. The Church also sought to inspire awe in the masses by using art to show the majesty of the Bible.

Baroque art was popular all over Europe. The style was characterized by dramatic motion, symmetry, deep colors, and a sense of emotion. Many of the paintings depicted natural landscapes and biblical subjects. They also included a wide variety of nude figures.

The Baroque style was also influenced by Italian and Spanish artists. Some of the most important artists were Annibale Carracci, Gian Lorenzo Bernini, Sebastian Bach, and Rembrandt van Rijn.

In Italy, the Baroque style spread quickly. It was primarily a form of architecture and painting. Large buildings and structures were created with elaborate carvings, cupolas, and domes. Interiors were also decorated with flowering vines and cupids.

A large part of Baroque art was the introduction of perspective painting. In this style, figures were surrounded by frames that were painted around the image. This gave the viewer an optical illusion.

During the 19th century, French artists were the dominant force in the art world. As a result, French institutions had to ensure that their artistic standards were up to scratch. In particular, they wanted to provide their students with artistic values and the means to achieve them.

One such institution was the Ecole des Beaux-Arts. Many of its students became well-known artists in their own right. In the early 1880s, Alexandre Cabanet took the academic art movement as far as it could go. He taught hundreds of his pupils, some of whom went on to win the illustrious Prix de Rome.

During this time, he became particularly adept at figurative painting of religious and mythological scenes. However, he also dabbled in other disciplines as his reputation grew. He also was bold with his designs. In addition to the Ecole, he designed interiors for hotels. He also painted attractive models in a variety of postures.

In addition to his academic credentials, he was also a very approachable artist. His paintings were not only visually pleasing, but they also demonstrated a lot of technical proficiency. His use of oil on linen was durable and malleable, which made it a suitable medium for the application of thick paint.

Generally speaking, an art style is defined as the style of artwork a particular artist creates. The style is determined by the choice of colors, composition, and form that the artist employs to produce his or her work.

For instance, Pop Art is a type of art that incorporates popular or commercial imagery into its works. The term “pop” is derived from the era in which this type of art emerged. During the mid to late 1950s, artists started producing works that were a mixture of words, images, and symbols from popular culture.

Similarly, Cubism is a type of art that focuses on breaking the subject into its component geometric shapes. The best part is that you can actually do this with almost any subject matter.

One of the most famous art styles of all time is Art Deco. It was a popular design style during the 1920s to 1930s. Originally a French design style, it spread to Europe and North America.

The Art Deco movement arose in France. The most famous of the designs incorporated organic shapes and flowing lines.

Psychedelic art is a type of art that combines bright colors with highly distorted visuals. It is influenced by 1960s youth culture, which included rock ‘n’ roll and drugs. Often it includes metaphysical elements.

The use of psychedelics is linked to an openness to the world and an increased sense of insight. It is also believed that the drug increases creativity. This has led to an interesting phenomenon: psychedelic art.

The psychedelic art styles of the late 1960s featured bright colors, full spectrums, and distortions. The art reflects the kaleidoscopic color patterns and insights from psychedelic states of consciousness.

Some of the first psychedelic artists include Victor Moscoso, Alton Mouse, Wes Wilson, Stanley Miller, and Rick Griffin. Wes Wilson is probably the most famous psychedelic poster artist. His posters include psychedelic images of The Grateful Dead, Jefferson Airplane, and Otis Redding.

Stanley Miller was an American psychedelic artist, best known for his work on the album covers for The Grateful Dead. During the early ’60s, he started to produce psychedelic rock posters. He became a regular contributor to the Zap Comix magazine.