What Are Arts Elements? 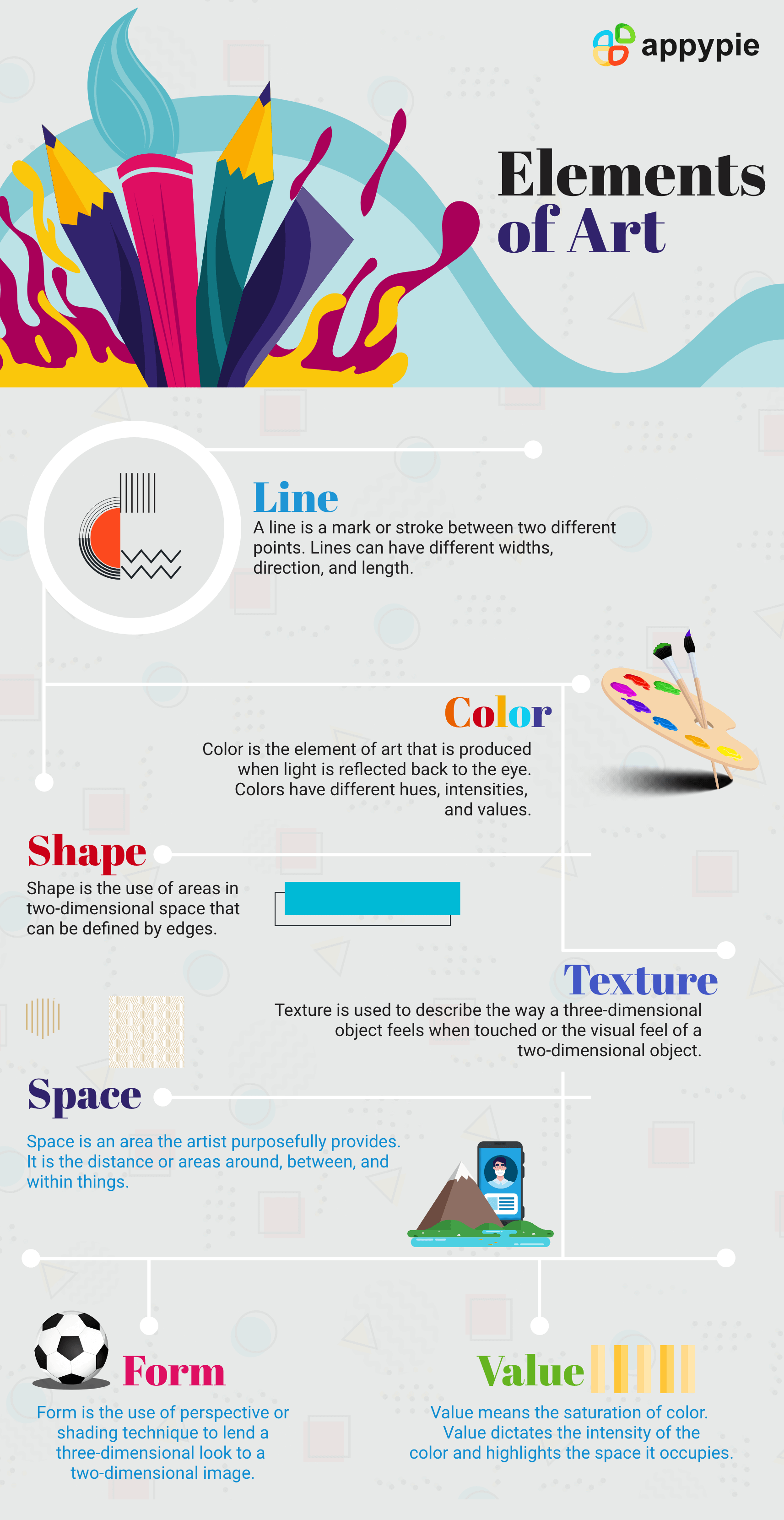 What Are Arts Elements?

Among the arts elements are Value, Texture, Space, and Form. These elements play a crucial role in making a piece of art. They are also the basis for the artist’s interpretation of the subject. Aside from these basic elements, there are several more. For instance, color is another important element in the creation of art.

Using texture in your artwork will help add to its depth and give it a more realistic appearance. This element can be used in a variety of ways, from sculpted work to abstract paintings.

It’s also one of the simplest things to do. There are several ways you can achieve this, from painting with a palette knife to adding some additives to your paint mix.

The best way to do this is to experiment with different materials. Try out watercolour paper to see if you can get a smoother surface than you might normally get on a photo quality computer paper.

Some of the most impressive works of art include those that utilize texture. For example, Monet’s ‘Water Lilies’ uses thick strokes of paint to create a realistic appearance.

Another example is a screen pattern in printing. This is the same concept as a chess board, but it is on a two-dimensional surface.

Other ways to create a texture-filled picture include using computer graphics and typography. The texture that you’re most likely to find in your work is not going to be the physical feel of the material, but rather an illusion.

In a two-dimensional piece, texture can be created in a number of ways, including using brushstrokes or crosshatching to give your painting a more three-dimensional appearance. You can also use texture to create optical illusions, or to draw your viewer’s eye to a particular area of the image.

Having space in your artwork is essential for a number of reasons. It can add depth and help bring balance to your composition. It can also present various visual effects that can make a difference in the success of your work.

There are many different ways to organize space in your work. For example, you can group objects close together to show a strong relationship or create a more immersive environment.

While space isn’t necessarily the star of the show in your artwork, it’s important to know the functions it can perform. For instance, you can use it to create an illusion of distance in your work. Using lines and shapes can also create texture, which is an evocative way to depict the surface of a different object.

For example, a small line of negative space can make a hill appear to be farther away. It can also be used to form letters or words.

A good example of space in art is the Recumbent Figure by Henry Moore. This is a two-dimensional painting that displays a woman reaching towards a tall, isolated farmstead.

While there are other art elements to look for in your work, space is one of the most overlooked.

Creating an illusion of form in two-dimensional artwork is one of the most important elements of art. In painting, a painter creates the appearance of form by placing light or shadow on a flat surface. A form is a shape that is defined by its height, width, depth, and volume.

A three-dimensional form is the basic structure of sculpture. This form is also the basis for decorative arts. It can be carved, painted, or manufactured. It can be in the round or in relief. It can be made of wood, metal, or a variety of other materials.

The word “form” comes from an Old French word, meaning “physical form.” It is the physical configuration of a person or object. It can be a geometric shape, an organic shape, or a representational shape.

Form is an important visual element in architecture, sculpture, and 3D design. In most artworks, space and form go hand in hand. In a work of art, the shape of the object determines its size and its position. The area around the object is called space. It can be positive or negative.

Other examples of forms are abstract, organic, geometric, or geometrically-inspired. Generally, shapes are created by combining texture with color contrast. Some artists play with three-dimensionality in order to enhance their artistic statement.

Adding value to your artwork can create a number of effects. For example, it can make a work of art seem more interesting and cohesive. It can also add depth to a painting. Depending on how you use it, value can even create an illusion of light.

For artists, value is a very important element of a piece of artwork. The purpose of value is to create contrast and texture. It can be used to emphasize a focal point or to give a painting more meaning.

One way to create a believable illusion of light is to use tonal values. Tonal values are a series of colors that are lighter and darker than the next. To achieve this, artists often use shading in their paintings.

Another type of tonal value is the value scale. Value scales vary from a lightest value of white to a darkest value of black. This infinite transition from white to black helps to suggest planes and textures.

Value is most commonly described as grayscale. Grayscale is a range of tonal values that is comprised of different gradients of white to gray to black. These tonal values are very helpful for painters to identify the light and dark elements in a piece of artwork.

Using cross hatching and hatching is an art element that is used by many artists. These techniques can be used to create a variety of effects and textures.

When used correctly, hatching can be a good way to create light and form. It can also be used to show textures, such as the bark of a tree. When working with ink, this technique is especially useful.

In addition to being a great technique, cross hatching can be used to create volume. The amount of hatching and spacing of lines can determine the brightness of an image.

It is also important to remember that different types of hatching can have a different effect on the value of an artwork. While the simplest type of hatching, parallel, is a good place to start, there are a number of other variations to consider.

Contour hatching is a method of following the contours of the object, rather than laying down straight parallel lines. This technique can be done with contour lines or by laying down a few layers of pastel colour.

Dotting is a similar technique. The same hatching and dotting methods can be used to represent various tones and textures in a drawing.

These are just a few of the techniques you can use to create a richer image. Practice the different aspects of hatching, and make sure to draw from light to dark.

Using the elements of art like line, shape, color, and texture, you can create emphasis in your artwork. Contrast is a tool that is used to emphasize a point, as well as to suggest a range of subject matter. It can also be used to build a concept for the work.

The main purpose of emphasis is to draw the eye of the viewer to a specific element of the piece. The focal point is the most important object in the composition. It is usually done by the use of lines to direct the eye to this point.

Another way of creating emphasis is through subordination. This technique is used when the artist wants to draw attention to one element, while obscuring another. It can be a useful tool for drawing the eye of a viewer to an area that may not be as important as the focal point.

Another technique that can be used to create emphasis is by using a large amount of color. A simple example would be a bright blue button on a white background. This is a great example of contrast because the color makes the button stand out.

Contrast and emphasis are two of the most important arts elements. They are a fundamental part of creating a composition. The two are used together to create interest and a sense of unity in a piece of artwork.